Isabella Alcañiz, an associate professor in the Department of Government and Politics and director of the Latin American and Caribbean Studies Center, made her public debut as a commissioner of the City of College Park’s inaugural Restorative Justice Commission at an event hosted by the Maryland School of Architecture, Planning and Preservation (MAPP) earlier this month.

Both the mayor of College Park and the College Park City Council appointed Alcañiz to the three-year position earlier this year, tasking her and her fellow commissioners with designing and implementing policies that would redress the negative impact that anti-black racism, urban sprawl, the University of Maryland, and number of other factors has had on College Park’s Lakeland community.

“The neighborhood of Lakeland was historically this beautiful, vibrant community of African Americans. But racist policies robbed the community of its rich cultural and commercial vibrancy,” said Alcañiz. “This has been recognized as a problem and a harm that continues to have a very direct effect on community members in Lakeland and in College Park, and I am honored and excited to be part of such a historic effort to impact in a positive way today’s Lakeland community members.”

As a commissioner, Alcañiz will participate in monthly meetings with roughly 20 other members of local government, from the Lakeland community itself, and from UMD—including Dr. James McShay, Assistant Vice President for Engagement; Andrew Fellows, a faculty specialist in the College of Information Studies; and Criminology and Criminal Justice alumna Zabrina S. Anzyl, ’05, who currently acts as an assistant director of the Honors College’s Integrated Life Sciences program.

“I'd never heard of Lakeland when I was studying criminology in Tydings as a Terp, but I think my criminal justice education has taught me that systems of oppression and harm continue to operate unless they are intentionally disrupted,” said Anzyl. “The Lakelanders have suffered generations of harm, and I'm honored to work with those community members and center their voices in this commission's work.”

The commission’s formation came at the recommendation of the City of College Park’s Steering Committee for Restorative Justice, of which Joseph Richardson, BSOS’ Joel and Kim Feller Professor of African American Studies and Anthropology, was asked to be a part because of his role as co-chair of the BSOS Anti-Black Racism Initiative’s (ABRI) Community Engagement and Policy Subcommittee.

With his fellow steering committee members—including MAPP event panelist Maxine Gross, now chair of the Restorative Justice Commission, and Mary Sies, a Department of American Studies associate professor and scholar of Lakeland—Richardson helped establish and spread word about the Restorative Justice Commission. It was through that effort that Alcañiz, Richardson’s ABRI subcommittee co-chair, decided to apply.

“I am quite proud of the work Isabella and I have done on behalf of the ABRI and the university to uplift restorative justice for the harms suffered by the Lakeland community,” said Richardson. “Our initial goals as the Community Engagement and Policy subcommittee were to address restorative justice in Prince George's County … [and] when we learned of the restorative justice steering committee for College Park, it was pretty much perfect timing because our goals aligned with what they were proposing—particularly around the issues that impacted Lakeland and the ways the university may have been complicit in that process, or at a minimum turned a blind eye to it.”

The commission is presently focused on two tasks: Working with elder Lakelanders to record and preserve the official history of Lakeland, and creating plans and proposals that would, in Alcañiz’s words, “address the grievances of the community and provide the strongest sense of restorative justice.”

As she recently expressed to MAPP event attendees, Alcañiz believes that money flowing back into Lakelanders’ hands is a solution the City of College Park should replicate—the City of Evanston, Illinois, where Alcañiz’s son was born, is currently awarding $25,000 housing grants to the area’s Black community members.

“Whatever policy is decided upon, there needs to be a monetary component that goes to Lakelanders,” said Alcañiz. “The commission can’t be symbolic only; that’s been done, and that’s not justice.” 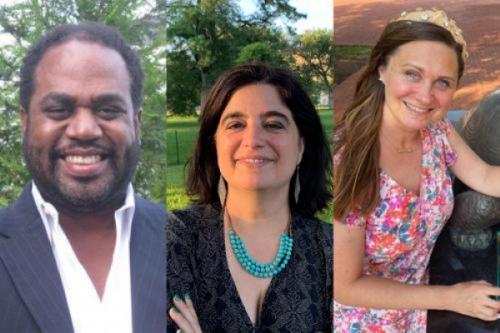