In 1997, Congress commissioned a team of six Maryland faculty, Lawrence Sherman, Denise Gottfredson, Doris MacKenzie, John Eck, Peter Reuter and Shawn Bushway, to conduct a thorough evaluation of crime prevention programs in the United States. At more than 20 years old, Preventing Crime: What Works, What Doesn’t, What’s Promising, known by many as simply “The Maryland Report,” has had an enduring impact on scientific and public policy discourse on crime prevention.

“Practitioners had been drawn into research in ways they never had been before The Maryland Report”, lead author Lawrence Sherman said.

First, the report educated many people on the idea that program evaluations vary widely in quality, as well as internal validity. The “Maryland Scale” was created for the report as a framework for judging evaluations, and has since been adopted by countries around the world as a standard for assessing evidence on crime prevention.

Second, one big effect of the report in general was to dispel the Martinson report’s “Nothing Works” narrative, showing that many programs were effective, even with rigorous testing and randomized trials.

Third, the specific areas covered by the report, from schools to urban development, were revived by the resource of a state-of-the-art about how governments could prevent crime more effectively.

Finally, the report led to the founding of the Campbell Collaboration, as an international review organization for evaluating crime prevention programs, as well as the Academy of Experimental Criminology, the ASC Division of Experimental Criminology, and the Societies of Evidence-Based Policing in the UK, Australia, New Zealand, Canada and the US.

For the full report, visit https://www.ncjrs.gov/pdffiles1/Digitization/165366NCJRS.pdf. 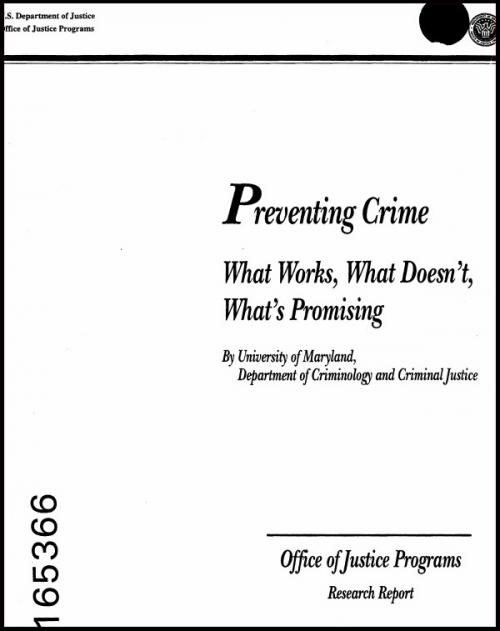