Senior Taylor-Omaree Smith was selected to serve as the BSOS Student Commencement Speaker on December 18. Smith is a criminology and criminal justice and government and politics major, with dual minors in business, innovation and entrepreneurship and law and society, and attends the University on a full scholarship through the Incentive Rewards Program. A first generation student, Smith has worked to make a mark on the community and the University.

“Coming to Maryland has always been my dream,” Smith says. “I always dreamed of higher education… and through Maryland, I have accomplished so many things”

Smith has not taken her commitment to education lightly. She  earned a spot on the Dean’s List for six consecutive semesters, and has received many awards for her service and academic success. Smith has also been inducted into 14 national honor societies, and serves on the national boards for four of them.

In addition to her studies and honor societies, Smith has served as an ambassador for BSOS, the Admissions Office, and the MLaw Program. Through these opportunities, she sat on panels, worked career fairs, and discussed opportunities with current and future Terps.

“I’ve always wanted to give back and help other people with their journey, the way other people helped me with mine,” she says.

Smith also served as a Teaching Assistant for the CCJS Department, and is currently a member of Delta Sigma Theta Sorority Incorporated.

Off campus, Smith participated in internships with both the State Attorney’s Office for Baltimore City and the Public Defender’s Office in Washington, D.C., which furthered her passion for the law.

Smith says she applied to speak at commencement because she can relate to her class as a whole.

“We have all had hard times, but we made it, and we’re here,” she says. “My journey at Maryland was of course my own, but I’ve gotten to see the good, the bad, the ugly, and everything in between. I always had a desire to keep going, because I knew where I was going.”

Smith says during her time at Maryland, it was the support of her friends, family, and University community that helped her to the finish line: graduation. Next, Smith hopes to pursue law school and eventually work in her home city of Baltimore.

“I’ve taken really interesting classes and had great experiences at the university,” she says, “but what I really want to do comes from where I come from. I want to give back.” 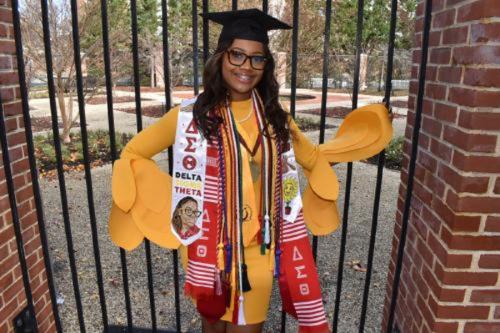