“There has been a strong presumption among many that while left-wing and right-wing ideologies vary a great deal in content, they resemble each other in terms of their willingness to use violence to further their political agenda. However, our analysis shows that right-wing actors are significantly more violent than left-wing actors,” said LaFree, a professor in the Department of Criminology and Criminal Justice (CCJS) and the founding director of the National Consortium for the Study of Terrorism and Responses to Terrorism (START).

Alongside Katarzyna Jasko from Poland’s Jagiellonian University, James Piazza from Pennsylvania State University, and Michael H. Becker, a graduate student in public policy at American University, LaFree looked at two datasets containing information about violent acts by left-wing, right-wing and Islamist extremist groups. The researchers believe this to be the first time that acts of violence by these three groups have been directly compared; previously, researchers primarily relied on attitude-based surveys and assessments to predict each group’s propensity to commit violence.

The second dataset, START’s Global Terrorism Database, provided information about violent acts of terrorism from around the world from 1970-2017, with “terrorism” being defined as “the threatened or actual use of illegal force and violence by non-state actors to attain a political, economic, religious, or social goal through fear, coercion, or intimidation.” After narrowing down the dataset to only include serious acts committed by people pledging allegiance to a group that can be classified as left-wing, right-wing or Islamist extremist—five or more acts per person—the researchers were left to analyze nearly 72,000 attacks from 523 unique subgroups.

“I think the data suggests that we should be taking right wing domestic terrorism way more seriously than many have done,” he said. “The ‘Fox News angle’ that Antifa is just as dangerous as the Proud Boys just doesn't hold up right now.”

Read the full paper in PNAS 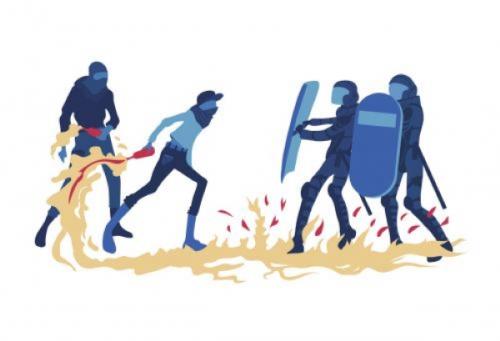