Being a scholar, an active and involved member of your college community, and an intern/employee can be—as one would imagine—quite the juggling act. Throw the University of Maryland Reserve Officers Training Corps (ROTC) into the mix and you’ll have the ambitious agenda being tackled by senior Criminology and Criminal Justice major Katherine Romero.

“Being a student in Army ROTC is challenging but rewarding,” Romero explained. “We don't just learn about leadership but are placed in practical exercises that push us out of our comfort zone and allow us to lead in real time. It is a commitment that, if you stick to it, will provide you with many opportunities to travel, network with high ranking officials, and participate in rigorous military training.”

Last fall, Romero served as the Cadet Battalion Commander, which involved coordinating training events for 90-100 cadets and acting as the liaison between cadets and instructors.

“I came to UMD because it had one of the best Criminal Justice programs and had many opportunities to intern and work alongside some of the agencies I revered through secured partnerships,” Romero went on, mentioning that her older brother’s UMD experience also played a part in her appreciation for the university.

“I remember watching movies about secret agents and how I would always be fascinated with their gadgets and skills,” Romero reminisced. “It may sound naive, but as I did more research I found out that doing something similar could turn into a viable career path through the FBI, CIA and other organizations.”

Trying to make that childhood dream a reality, Romero participated in a variety of UMD programs and organizations including the College Park Scholars program, the Public Leadership Council, the Rawlings Undergraduate Leadership Fellows Program and the Federal Fellows Program. Romero also worked as a student assistant in the Leadership and Community Service Learning Office.

Additionally, Romero held two internships; one at the Governor’s Office of Community Initiatives where she worked on “Day to Serve” (an event encouraging locals to commit to community service), and the other with the Department of Homeland Security’s Protective Intelligence Branch.

“I learned a lot about Counterintelligence and made lasting network connections,” said Romero, who dreams of being the National Security Advisor to the President. “These all relate to what I want to do because I would like to continue my public service after the military in a national or local level dealing with national security.”

After graduating this May, Romero will be commissioning as an Army Second Lieutenant, Military Intelligence Officer. She will further her branch training in Arizona and eventually be stationed in Fort Bragg, North Carolina.

“I am looking forward to serving in the Army and then will hopefully continue serving the nation through a position in the federal government,” Romero concluded. 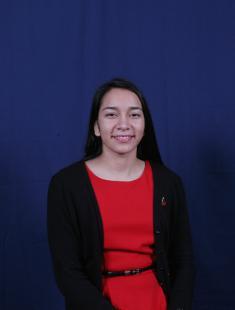