Engaging in Current Events as Criminologists (ECEC) is a student-led lecture series focused on Police-Community Relations in Marginalized Neighborhoods, and within that broad topic we will be concentrating locally on Baltimore.  ECEC will take place over four evenings throughout February, March, and April, with each session building on the previous.  The speaker series brings together multiple perspectives on police-community relations, informing the process of conducting police-relevant research, and disseminating that research to policy makers. That is, connecting what is happening in the real world with practical considerations at each stage in the research process.

DeRay Mckesson is a Baltimore-based, civil rights activist focused primarily on issues of innovation, equity, and justice. DeRay is a leading voice in the Black Lives Matter Movement and the co-founder of Campaign Zero and OurStates.org. He has worked to connect individuals with knowledge and tools, and provide citizens and policy makers with commonsense policies to ensure equity. He has become a key voice in the effort to confront the systems and structures that have led to mass incarceration and police killings of black and other minority populations. DeRay was named as one of the World’s Greatest Leaders by Fortune Magazine in 2015 and as one of the 30 Most Important People On The Internet by Time Magazine in 2016.

The law enforcement career of David B. Mitchell spans four decades. His career began in 1971 as a Police Officer in Prince George’s County Maryland. He worked his way up the ranks and in 1990 was appointed Chief of Police. For the next five years he led the 38th largest police department in the nation. In 1995, Dave was appointed to the Governor’s Cabinet the Superintendent of the Maryland State Police. As Superintendent, he led the seventh largest state police department in the nation for eight years including during the 9-11 attacks in 2001 and the D.C. Sniper case in 2003. After retiring from the state police, Dave served a five-year term as the Secretary of the Department of Safety and Homeland Security in Delaware. Today, Chief Mitchell serves as the Director of Public Safety and Chief of Police for the University of Maryland College Park Campus.

Dr. Pratt-Harris is an associate professor and coordinator of the Criminal Justice program in the Department of Sociology, Anthropology, and Criminal Justice with Morgan State University. Dr. Pratt-Harris is the only Black female criminologist who grew up in the city of Baltimore, attended k-12 public schools in the city, and is a current full-time tenured professor teaching in the discipline in the city. Dr. Pratt-Harris collaborates on grants that address pressing crime problems and the realities of policing in urban areas. In 2016,  Dr. Pratt-Harris and colleagues published research critically assessing police-involved homicides of unarmed black males, and during the 2017-2018 academic year Dr. Pratt-Harris collaborated with scholars, activists, professionals, and members of the community to begin writing a police training guide.

K. Nyerere Turè is a practicing urban ethnographer and a Postdoctoral Associate in the Urban Ethnography Project at Yale. Dr. Turè earned a BA in African/African American Studies and Criminal Justice at Rutgers, a MA in Applied Anthropology at Georgia State University, and a PhD from American University. Between undergraduate and graduate school, he engaged in an informal participatory project of law enforcement agencies at the municipal, county and state level and, as a result, he was certified in basic law enforcement and sheriff deputy through the Georgia Peace Officer Standards and Training academy (Fulton County). He enjoyed a short tenure as a practicing police officer and jailer. With this professional experience, he provides invaluable insights into the wide range of police practices, as well as a unique perspective on the licensing of law enforcement agencies to police and socially control communities and people of color. Currently, he is interested in exploring the ethnographic encounters of law enforcement toward stigmatized and urban African Americans.

Dr. Sherman is Chair of the Police Executive Programme at the University of Cambridge and Distinguished University Professor at the University of Maryland. He began his career in the NYPD as a civilian analyst in the Office of the Police Commissioner. Since then he has conducted or designed experiments in over 30 police agencies across five continents, working with police in London, Hong Kong, Australia, Denmark, Sweden, Canada and many US cities. Sherman is Editor-in-Chief of the Cambridge Journal of Evidence-Based Policing and the author of over 300 publications on crime and policing.

Renée J. Mitchell, J.D., Ph.D. is a sergeant at the Sacramento Police Department, a visiting scholar at the University of Cambridge and a post-doctoral researcher at Hebrew University of Jerusalem. She is the President of the American Society of Evidence-Based Policing. In 2009/2010 she was a Fulbright Police Research Fellow. Her research areas include evidence-based crime prevention, place-based criminology, police/citizen communication and procedural justice. You can view her TEDx talks, “Research not protests” and “Policing Needs to Change: Trust me I’m a Cop”, where she advocates for evidence-based policing.

Leon Pinkett, III was elected Baltimore City councilman for the 7th district on November 8, 2016. He represents the district where Freddie Gray was arrested in 2015. Public safety is among his top policy concerns, particularly “[promoting] public safety through enhanced crime prevention efforts (community-police partnerships, upgraded lighting and installation of cameras) and improved emergency response,” as well as “[developing and implementing] pre-booking diversion programs as an alternative for minor drug arrests, in order to connect offenders with treatment, employment and housing services.” Prior to his election, Mr. Pinkett served as Assistant Deputy Mayor for the Mayor’s Office of Economic and Neighborhood Development and as the Mayor’s Office Representative on the Baltimore City Planning Commission.

Jessica Lussenhop is a senior staff writer (and occasional radio producer) in the Washington, D.C., bureau of BBC News. She is an alum of several alternative newsweeklies including the Minneapolis City Pages and the St Louis Riverfront Times, and has been featured on an episode of This American Life. Find more of her work at www.jessicalussenhop.com

How do those in the community and the police view current police-community relations in Baltimore? What are the challenges and potential steps to take to improving relations?

How does the media see police-community relationships in Baltimore? What are the best ways to conduct policy-relevant research? What is the best way to disseminate research to policy-makers?

Each Session will be live streamed via Webinar and recordings of each webinar will be posted on this page. The Dates and locations for each session are below. Seating is limited, so please RSVP if you would like to participate in person ASAP. We also encourage people to participate remotely through the Live Webinar. To view recordings WebEx will prompt you to download the extension - this is normal. 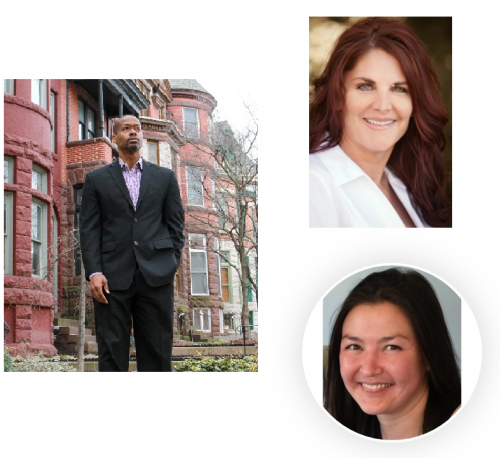